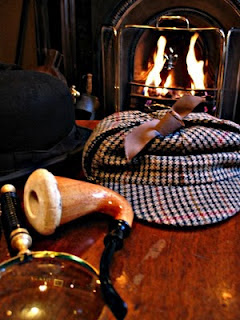 Caledonia Skytower continues with the second of Sir Arthur Conan Doyle's short story collections about the adventures of his famous detective and the doings generated from Baker Street: "The Memoirs of Sherlock Holmes" ~ THE ADVENTURE OF THE NAVAL TREATY.

Dr. Watson receives a letter, which he then refers to Holmes, from an old schoolmate, now a Foreign Office employee from Woking who has had an important naval treaty stolen from his office. It disappeared while Mr. Percy Phelps had stepped out of his office momentarily late in the evening to see about some coffee that he had ordered. His office has two entrances, each joined by a stairway to a single landing. The commissionaire kept watch at the main entrance. There was no-one watching at the side entrance. Phelps also knew that his fiancée's brother was in town and that he might drop by. Phelps was alone in the office.

Phelps pulled the bell cord in his office to summon the commissionaire, and to his surprise the commissionaire's wife came up instead. He worked at copying the treaty that he had been given while he waited. At last, he went to see the commissionaire when it had taken some time for the coffee to arrive. He found him asleep with the kettle boiling furiously. He did not need to wake him up, however, as just then, the bell linked to his office rang. Realizing that someone was in his office with the treaty spread out on his desk, Phelps rushed back up and found that the document had vanished, and so had the thief.


Presented live in voice.
Posted by Caledonia S at 11:30 PM