Seanchai Library On The Move

Second Life – Seanchai Library, one of Second Life's oldest spoken word programs -  now in its tenth year, is relocating from its current home on the Bradley University, hosted by the Community Virtual Library (CVL), to Holly Kai Park on the Blake Sea, part of the vast USS Regions and Estates.

"Both Seanchai and the CVL are currently facing crossroads in their organizational lives" said Caledonia Skytower, representing Seanchai Library, "Such transitional times involve challenging processes of review, reflection, and analysis in our best efforts to keep our presences in the virtual world relevant. Done well, it leads to healthy change."  Seanchai Library engaged in just such a review and discussion process, and decided to take advantage of an offer to join the arts programming on Holly Kai, which includes the Art Hill, music events at The Pavilion, regular DJ gatherings at Catinara Bar, and larger community events such as the recent "Filling the Cauldron" fundraiser in early April.

"Seanchai Library is the perfect compliment to what we already present here." said Holly Kai Curator Inara Pey, "We have enjoyed the storytelling programs that we have already offered, and are excited about having a greater spoken word presence here as part of our portfolio of features."  Seanchai and Holly Kai have already collaborated on several events including last October's "The Great Boo" ghost stories, "Dragon Tales" at the recent fundraiser, and an ongoing series of "Stories at the Park" presenting original micro-fiction and poetry inspired by, and presented concurrent to, the regular series of art installations.

In 2010, Seanchai accepted an invitation to make the CVL its home.  From locations on Info Island International, , and in the last two years on , the Library has produced over 1,800 hours of live programming promoting literature, stories, and poetry.  Seanchai Library has supported cooperative programming with the CVL; producing numerous fundraising events, and twice producing The Dickens Project as a benefit for the CVL.

"This move is not a 'good bye and good luck' move," Skytower clarified, "One of the great strengths of virtual worlds is the ability for it to break down barriers, including those of proximity.  While the move to Holly Kai provides Seanchai Library with some new opportunities, it does not do so to the exclusion of other relationships. We believe that all of our cooperative relationships, including with the CVL, will benefit by this change."  Seanchai Library has already reached an  agreement regarding this year's edition of The Dickens Project, scheduled to take place in a LEA Core Region this December, with the CVL contributing background resources on Charles Dickens and Victorian England that will be available to all visitors.

Seanchai Library will present its last story on Bradley University on Thursday, June 22nd at 7pm with Chief Storyteller Shandon Loring's presentation of Ron Rash's "The Southern Thing," opening in the new location the following Sunday, June 25th at 1:30pm. All times slt.
Seanchai Library (Shawn-a-key, which means "Storyteller" in Irish.) was founded in March of 2008 in Second Life. Thousands of stories, and hundreds of authors later, the program remains dedicated to promoting the power of stories to transform and inspire through live voice presentations: "We bring stories of all kinds to life, in Second Life." Learn more about the program at Seanchai Library's website - seanchailibrary.com 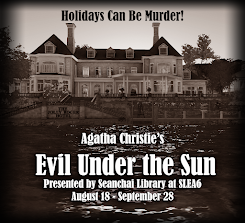