SUNDAY, September 26th at 1:30pm: TEATIME - A Night in the Lonesome October *begins* 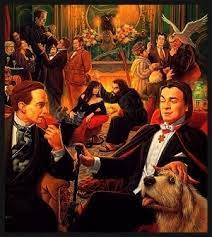 Today a new teatime series begins for the fall featuring Roger Zelazny's final work - a celebration of the spookable season presented weekly. The story is told in the first-person, akin to journal entries. The title is a line from Edgar Allan Poe's "Ulalume" and Zelazny thanks him as well as others – Mary Shelley, Bram Stoker, Sir Arthur Conan Doyle, Robert Bloch and Albert Payson Terhune – whose most famous characters appear in the book.

Corwyn Allen, Da5id Abbot, Gloriana Maertens and Caledonia Skytower get us started on a new adventure, live on Stream in The Glen http://maps.secondlife.com/secondlife/Nowhereville/197/131/21

FOLLOWED @ 2:30pm by an hour of music celebrating the season with VIRTUAL COMMUNITY RADIO and Elrik Merlin.   https://vcradio.org/

Posted by Seanchai Library at 9:31 AM