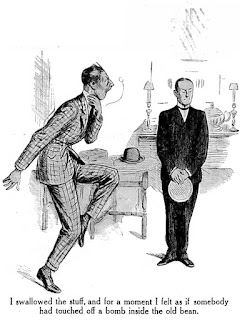 P.G.Wodehouse was an English author and one of the most widely read humorists of the 20th century. Most of Wodehouse's fiction is set in his native United Kingdom, although he spent much of his life in the US and used New York and Hollywood as settings for some of his novels and short stories.

Wodehouse was a prolific writer throughout his life, publishing more than ninety books, forty plays, two hundred short stories and other writings between 1902 and 1974. He worked extensively on his books, sometimes having two or more in preparation simultaneously. He would take up to two years to build a plot and write a scenario of about thirty thousand words. After the scenario was complete he would write the story.

The adventures (or misadventures if you will) of Jeeves and Wooster were televised in a collaboration between Brian Eastman of Picture Partnership Productions and Granada Television. It starred the most estimable comedy team of Hugh Laurie and Stephen Fry.

The ebook can be found here

Find a host of collections here

More on Jeeves himself at Wikipedia

Posted by Seanchai Library at 6:43 PM