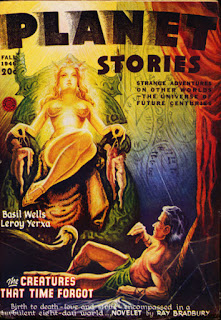 The runner up in the recent poll nominating "Science Fiction By Command" for the just completed Volume 10 celebration, Gyro presents Ray Bradbury's 1946 classic.

Placed there by a past rocket ship that crashed, the people of the storied land are within sight of another rocket ship on a distant mountain plateau. The plot follows Sim, the protagonist of this story, and his apparently short life on a planet where people are cursed by radiation to live only eight days.

The people of this planet are also gifted with racial memory (they remember their ancestors' memories). However, they do not attempt to reach the sole remaining rocket ship due to the futility of attempting to reach it in one hour, which is the longest length of time between day and night (both deadly).

Sim is then moved by the memory of his ancestors to find and meet with scientists who make halting progress towards the goal of lengthening the world's decreased life span. Sim, motivated by his dwindling days, makes it his goal to extend his life and reach the distant rocket, despite the protests of his sister and other cave-dwellers.


Presented Live in voice.
https://maps.secondlife.com/secondlife/Holly%20Kai%20Estates/215/44/27
Posted by Seanchai Library at 3:35 AM