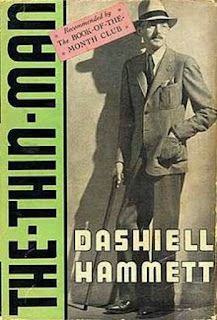 Tea Time is back with a brand new mystery series: Dashiell Hammett's The Thin Man, originally
published in Redbook magazine  in 1933, and published in book form the following year.


The story is set in in December 1932, in the last days of Prohibition. The main characters are a former private detective, Nick Charles, and his clever young wife, Nora. Nick, son of a Greek immigrant, has given up his career since marrying Nora, a wealthy socialite, and he spends most of his time cheerfully getting drunk in hotel rooms and speakeasies. Nick and Nora have no children, but they own a female Schnauzer named Asta.

Charles is drawn, mostly against his will, into investigating a murder. The case brings them in contact with a rather grotesque family, the Wynants, and with various policemen and lowlifes. As they attempt to solve the case, Nick and Nora share a great deal of banter and witty dialogue, along with copious amounts of alcohol.