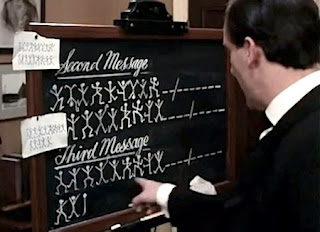 @ 1:30pm: TEA TIME at Baker Street
Tea Time continues its sojourn at Crazy Eights on LEA 9 with with the next adventure from Sir Arthur Conan Doyle's collection "The Return of Sherlock Holmes"

THIS WEEK: The Adventure of the Norwood Builder

Mr. Hilton Cubitt of Ridling Thorpe Manor in visits Sherlock Holmes and gives him a piece of paper with this mysterious sequence of stick figures. The little dancing men are at the heart of a mystery which seems to be driving his young wife Elsie Patrick to distraction. He married her about 3 years ago, and until recently, everything was well. She is American, and before the wedding, she asked her husband-to-be to promise her never to ask about her past, as she had had some “very disagreeable associations” in her life, although she said that there was nothing that she was personally ashamed of. Mr. Cubitt swore the promise and, being an honourable English gentleman, insists on living by it, which is one of the things causing difficulty at Ridling Thorpe Manor. 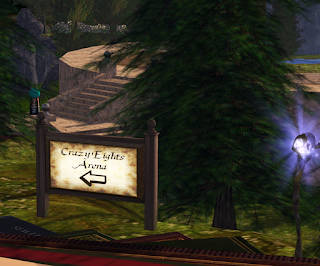 @ 3pm: STORYTELLERS' SANDBOX at the Crazy Eights Arena
Storytellers' Sandbox at Crazy Eights is designed to providing a forum for new stories, new storytellers, and new ways to present them.

The first Sandbox will feature:

Artist and Storyteller Hana Hoo ~  "I am a storyteller, but at the same time I am very visual because a good image will tell a story of its’ own.  I love to explore the mystery of light and shadow at play and I'm fond of both woodland and old stones.  In SL I began to see some of my own stories reflected in fantasy landscapes so I began to use some of the images I photographed here. https://cybeleshineblog.wordpress.com/

Author Dulcie Mills with her newest work: In the physical world Duclcie workd as a referecne librarian for a public library in Long Island.   Her second romantic suspense novel, "A Stone's Throw" has been published by Limitless Publishing, LLC. It is the story of a widowed librarian who visits her husband's home town and finds a new love with the town's newspaper publisher but also discovers some alarming truths about her husband's death and its connection to the publisher and his family. She is currently at work on another Cobble Cove novel what will be a sequel to "A Stone's Throw." Her Amazon author page.

. . .  and last but never truly least, the ever creative Trolley Trollop with selections from THE TAO OF MARTHA. "After all, she’s no Martha Stewart. And that’s why Jen is going to Martha up and live her life according to the advice of America’s overachieving older sister—the woman who turns lemons into lavender-infused lemonade. Maybe Jen can avoid food poisoning if she follows Martha’s dictates on proper storage. Maybe she can rid her workout clothes of meatball stains by using Martha’s laundry tips. Maybe she can create a more meaningful anniversary celebration than getting drunk in the pool with her husband. Again. And maybe she’ll discover that the key to happiness does, in fact, lie in Martha’s perfectly arranged cupboards and charcuterie platters."

Many thanks for the opportunity to join in with the storytelling!!