MONDAY, November 30th at 7pm: MURDER WILL IN concludes.. plus more!

And then... Bonus! Bonus!
One of the below stories will follow: 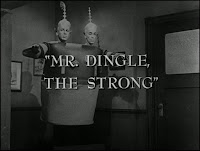 Mr. Dingle is a milquetoast, a classic scrawny weakling who unknowingly becomes involved in social experiments by extraterrestrials.

In an alternate history Earth, radio was invented in the early 14th century.  After an early ship meets apparent disaster attempting to reach the Orient via the Atlantic Ocean, the Columbus Exploration Organization now uses radio to keep tight control over the marine explorers.