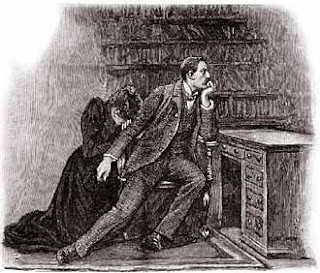 
One of the 56 short Sherlock Holmes stories written by British author Sir Arthur Conan Doyle, is the third tale from The Memoirs of Sherlock Holmes. It was first published in Strand Magazine in 1893 with original illustrations by Sidney Paget. One of Doyle's sentimental pieces, the story is remarkable in that Holmes' deduction during the course of it proves incorrect. (Nevertheless, the truth still comes out.) According to Dr. Watson:

"...where he failed it happened too often that no one else succeeded... Now and again, however, it chanced that even when he erred the truth was still discovered."

AND A SENTIMENTAL SUNDAY BONUS!  "The Mystery of the Spot Ball" ... a Sherlock Holmes parody submitted to the Edinburgh Student journal in 1893, which many suspect was written by Conan Doyle himself! Found from the depths of obscurity by our own Rick Qargen and brought to you this week for your added joy and amusement!
Corwyn Allen, Kayden Oconnell, and Caledonia Skytower live in voice.
Posted by Caledonia S at 5:50 PM