WEDNESDAY, February 13th at 7PM: More from QUITE A YEAR FOR PLUMS 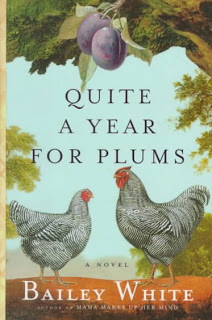 "Bailey White loves names: sasanqua, krummhorn, anhinga, Zephair, Alba Plena, nematode. All appear in this, her first novel. They represent, respectively, a tree, a musical instrument, a bird, an electric fan, a camellia and a roundworm of the phylum Aschelminthes.

"The homely nematode, in fact, inspires one of the best passages in Quite a Year for Plums, a teeming novel of life among the restless and resilient inhabitants of a south Georgia town. Roger, a plant pathologist, has explained to his old friend Hilma that microscopic nematodes occupy ''almost every part of every organism.'' If the earth and its host inhabitants were to suddenly vanish, the remainder, as Hilma imagines it, would be 'the ghost of a gone world, lingering for one second in space and then dissolving into the silvery dust of collapsing nematodes.'

"That well-turned phrase demonstrates the book's clean, strong style and may allude to its abiding concern, or one of them: What if we're living in the ghost of a gone world? What if the useful adzes of our ancestors have become kitsch to be displayed mindlessly in bland restaurants, and the old constricting social arrangements have given way to uncertainty and missed connections?"

More romance, obessive behavior, and that unique brand of small town joy that can only be found in Bailey White's Georgia.  Kayden Oconnell and Caledonia Skytower continue in voice.
Posted by Caledonia S at 7:00 PM