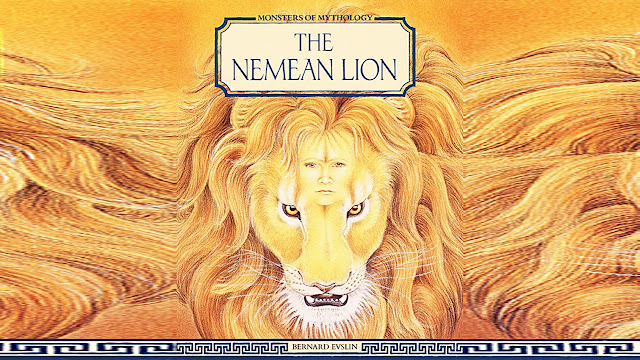 The world’s fascination with monsters harks back to the dawn of civilization – and even to prehistoric times – when mankind first sought to explain the magical and capricious forces of nature.

Civilized as the ancients were, the stories they told were filled with horrifying creatures. They called them monsters, and there was nothing civil about them. From Anteus, the bloodthirsty cannibal giant, to Hecate, the beautiful, ambitious tormentor of the dead, to the ogre Fafnir, whose guests for dinner become his dinner, the monsters of mythology embody the dark side of human nature. Their battles with Ulysses, Jason, and the other heroes and heroines of legend represent the ongoing contest between all that is worst, all that is best, and all that stands in between.

Tonight we feature the Nemean Lion, a murderous beast who terrorizes the people of Nemea with his ivory-dagger teeth, brass talons, and impenetrable armor hide. But Nemea is merely a practice ground for the lion; his true task is to serve Zeus, King of the gods, who needs a special monster to destroy the latest threat to his rule: a sickly, undersized child destined, the god-king has warned, to shake his entire kingdom.

Unaware of heroic fate, the tine Palaemona falls in love with Melampus, the healer, who can revive the dead and save them from an eternity in Tartarus under Hades’ brutal reign. But the healer’s betrayal and Palaemona’s yearning for his love soon lead her to the grotesque Bullman, who employs bulls to savagely tear his victims in half, shredding their skin and bones, spilling their blood like fertilizer across his furrowed land. The Bullman quickly prepares Palaemona for a similar end – one that would leave this ancient time desperately short of heroes.

Caught between a world she so much wants to love and a world she is terribly unsure of, a young girl struggles to find the answers that lie just beyond her reach. Surrounded by treacherous gods, enormous killer bees, and leather-winged demons, she must face one of the most frightening creatures to ever walk the land: the Nemean Lion. Standing alone, this brave young girl is the only one who can prevent the darkness from engulfing an already fragile world.