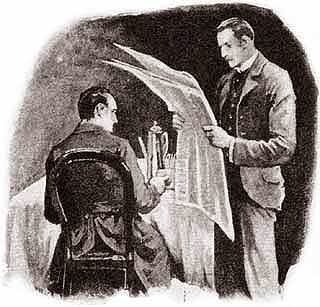 Join Kayden, and Caledonia as they continue at the beginning of the Holmesian canon - "The Adventures of Sherlock Holmes"  THIS WEEK: The Five Orange Pips.


A young gentleman named John Openshaw has a strange story.  It involves mysterious letters received by both his Uncle and his Father containing the text “K.K.K.” and five orange pips.  It was followed, in each case, by the equally mysterious death of both of these men.  Now, almost three years after the death of his father, Openshaw has received a similar missive.  Who is “K.K.K.” and what is the meaning of the five orange pips?

Come find a comfy seat and pour yourself a cuppa and enjoy, presented live in voice.
Posted by Caledonia S at 10:11 AM