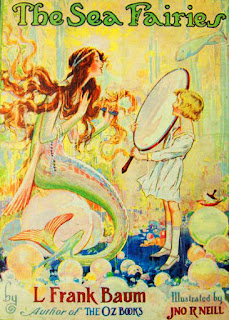 Mayre Griffiths, nicknamed Trot, is a little girl who lives on the coast of southern . Her father is the captain of a sailing schooner, and her constant companion is Cap'n Bill Weedles, a retired sailor with a wooden leg. (Cap'n Bill had been Trot's father's skipper, and Charlie Griffiths had been his mate, before the accident that took the older man's leg.) Trot and Cap'n Bill spend many of their days roaming the beaches near home, or rowing and sailing along the coast. One day, Trot wishes that she could see a mermaid; her wish is overheard, and granted the next day. The mermaids explain to Trot, and the distressed Cap'n Bill, that they are benevolent fairies; when they offer Trot a chance to pay a visit to their land in mermaid form, Trot is enthusiastic, and Bill is too loyal to let her go off without him.

So begins their sojourn among the sea fairies.

Posted by Seanchai Library at 9:08 AM