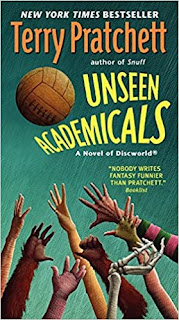 Archchancellor Mustrum Ridcully sets out a two-pronged strategy: to ensure the city’s version of football is restructured with proper (and favourable?) rules, and to put team preparations at the university in the hands of the talented candle dribbler, Mr. Nutt and his assistant, Trevor Likely, the son of the city’s most famous (if deceased – did I mention the game can be violent?) player, who are in turn supported by Glenda Sugarbean, who runs the university’s night kitchen and her assistant Juliet Stollop.

Except Mr. Nutt soon discovers he has problems of his own to deal with, and Trevor has promised his Mum he’ll never get involved in the game.  Meanwhile, Glenda has the daily responsibility of baking the Discworld’s best pies, and Juliet is about to find herself whisked towards the heights of fame as a fashion model, thus potentially leaving the team a little short on practical advice…

Join Caledonia Skytower as she presents the 37th novel in the Discworld series, and possibly one of its greatest satirical undertakings encompassing football, academia, traditions, the fashion industry, politics, love, fandom, and which mixes in more serious themes of identity, crab mentality and self-worth.

Presented in honor of the late VT Torvalar.

Posted by Seanchai Library at 7:40 PM