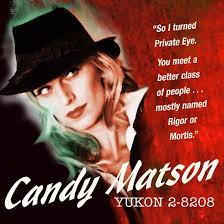 Candy Matson  2-8209 is a radio program on NBC West Coast that aired from June  29, 1949, to May 20, 1951. It centered on Candy Matson, a female private investigator with a wry sense of humor and a penthouse on Telegraph Hill in . The program was notable for having a striking female character "without a trace of squeamishness" as well as a veiled gay character in Candy's best friend Rembrandt Watson.

In addition to the show being set in , it was produced at .

The aftermath of a 1950 episode illustrated the program's popularity. A newspaper story related: "It seems that during the closing moments of the last Monday's sequence, Candy is in an aircraft repeating the 'Twenty-third Psalm' as the plane crashes into a lake. At that point the show ends. And at that point the switchboard at started lighting up like a Christmas tree. More than 800 calls were received shortly after the program signed off. All of them wondering what happened to their heroine."

Posted by Seanchai Library at 8:07 PM