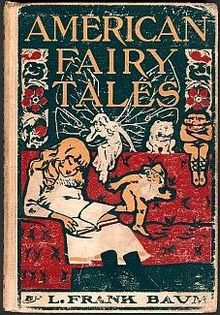 TODAY: from AMERICAN FAIRY TALES ~ The Capture of Father Time, The Dummy That Lived, The King of the Polar Bears, and the Introduction from SEA FAIRIES (which we'll read more from in our final session next week)

Lyman Frank Baum (May 15th, 1856 – May 6th, 1919) was an American author best known for his children’s books, particularly The Wonderful Wizard of Oz and its sequels (14 novels in all). His prolific output included 55 novels, 83 short stories,  over 200 poems and at least 42 scripts.

Baum sought to create a uniquely American mythology separate from any European roots. In typically Yankee fashion, he accomplished this by creating a melting pot of story archetypes, mixed and brewed into a somewhat satirical, sometimes glib, very tongue-in-cheek concoction that still manages a certain quaintness.

Posted by Seanchai Library at 7:09 AM