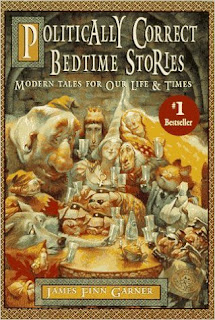 Once upon a time, in the olden days, heavy-set middle-aged men would congregate in their elitist clubs, sit in over-stuffed leather chairs, smoke air-choking cigars, and pitch story ideas and plots to each other. Problem was, these stories, many of which found their way into the general social consciousness, reflected the way in which these men lived and saw their world: that is, the stories were sexist, discriminatory, unfair, culturally biased, and in general, demeaning to witches, animals, goblins, and fairies everywhere.

Finally, after centuries of these abusive tales, which have been handed down--unknowingly--from one male-biased generation to the next, James Finn Garner has taken it upon himself (that's right, yet another man) to enlighten and liberate these classic bedtime stories and retell them in a way that is much more in keeping with the society in which we live today.

Originally published in 1994, Politically Correct Bedtime Stories spent more than 60 weeks on the New York Times Bestseller list, eventually hitting the #1 spot. Also a best seller in Canada and Great Britain, it has been translated into more than 25 languages and adapted numberless times for stage and radio. According to the Times of London: “It is beautiful. It demolishes, in few but elegant words, a dozen kinds of silliness. It is better than I can possibly convey.”