MONDAY, February 13th at 7:00pm: THE CRUCIBLE OF TIME Resumes 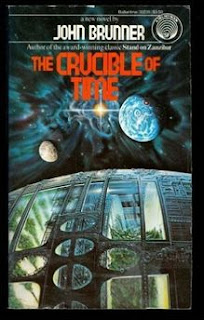 Gyro Muggins resumes this saga by John Brunner. First published as two-part story which appeared in Isaac Asimov’s Science Fiction Magazine, it’s an ambitious tale of alien intelligence which grew to a series of six linked tales pushed as a single novel in 1983.
Far off in space is an alien race which is so much like us, yet so un-alike. From the birth of their earliest civilization through to their attainment of star flight as their star system passes through the galaxy, we follow their development through the ages.
Aquatic by nature, this race presents some significant challenges well outside the realms of anything encountered by humanity. But they are also driven by all too familiar hopes, fears, desires, needs, wants, prejudices, impact of religious ideologies, and the quest for knowledge we have experienced in the growth of our own civilization.
Charting six periods of time, each a thousand years after the previous, the six stories focus on the efforts of a group of individuals in each era as they face one or more challenges, their success in overcoming these challenges inevitably leading them towards a greater understanding of their planet’s plight, and ultimately, the ability to deal with that plight and the survival of their civilization.
Presented live in voice.  http://maps.secondlife.com/secondlife/Bradley%20University/101/208/28
Posted by Caledonia S at 9:09 AM