Dickens' contemporary, William Makepeace Thackeray, was as scathing a critic as ever walked the street of London, once said of A Christmas Carol, "Who can listen to objections to such a book as this? It seems to me a national benefit, and to every man or woman who reads it, a personal kindness."

@ 11am - Traditional Dances and Music with Wald Schridde, 17th and 18thC tunes played in traditional instruments, live in Christmas Present Square. COME EARLY in case the Raglan Shire Tiny Carolers make one final, triumphant Wootmas appearance!
@ NOON: THE BIG READ: "A Christmas Carol" - All the words of every stave presented all at once by a cast of voices, presenting in relay. Est 3.5 hours. Live in Christmas Present Square.
The Dickens Project 2016 on Water Haven in Second Life.
The build will be open to the public through the end of the virtual day Tuesday.

This year's Project has been Co-Sponsored by Kultivate Magazine, and  benefits Team Diabetes of Second Life (American Diabetes Association) 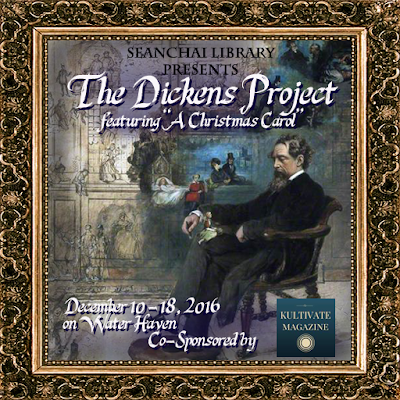