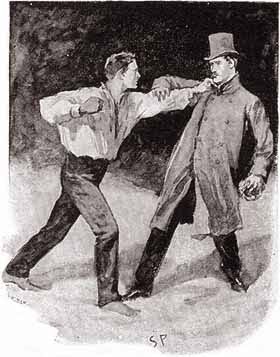 A banker, Mr. Alexander Holder of Streatham, makes a loan of £50,000 to a socially prominent client, who leaves the Beryl Coronet — one of the most valuable public possessions in existence — as collateral. Holder feels that he must not leave this rare and precious piece of jewelry in his personal safe at the bank, and so he takes it home with him to lock it up there. He is awakened in the night by a noise, enters his dressing room, and is horrified to see his son Arthur with the coronet in his hands, apparently trying to bend it. Holder's niece Mary comes at the sound of all the shouting and, seeing the damaged coronet, faints dead away. Three beryls are missing from it. In a panic, Mr. Holder travels to see Holmes, who agrees to take the case.
Corwyn Allen, John Morland, and Caledonia Skytower live in voice.
Posted by Caledonia S at 9:49 PM