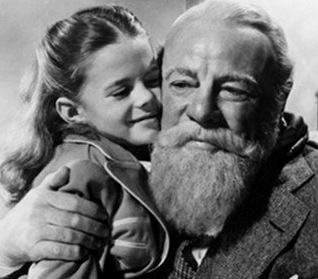 "Faith is believing, even when common sense says it can't be so."

Kris Kringle's presence in Macy's has had a profound effect on those around him, as well as people throughout New York.  The word is spreading! Now he is on trial for for his sanity, and the idea of Santa Claus is being debated as the larger issue.  If there really is a Santa Claus, then can Kris be committed as a lunatic?  Will his efforts to promote the true spirit of Christmas be in vain?

Since the beloved 1947 classic film was made based on Valentine Davies story, MIRACLE ON 34th STREET has been made a treasured part of holiday traditions by generations of believers in hope and goodwill. Celebrating the 65th Anniversary of the Motion Picture’s release, and presented Live in Voice by Caledonia Skytower.
Posted by Caledonia S at 6:00 PM