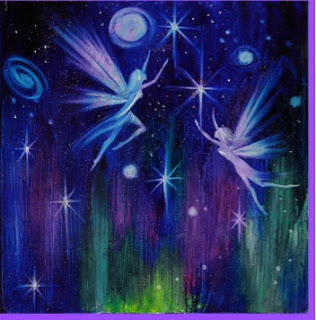 When Celia Lovejoy's parents announce that her grandmother is coming to live with them, Celia is delighted. Now while her parents work at their toy company, she can spend time with Grammy instead of going to bossy Paul's house. When her grandmother tells stories about the fairies living in the woods behind Celia's house, her parents are quick to dismiss it. "Just a lot of nonsense," says her father with a wave of his hand. Her mother reminds her that a ten-year-old girl is too old to believe in magic. But if there are no fairies, how to explain the glimmers of light she sees from her balcony at night? And why does she dream of a fairy girl begging for help? All of the answers are in the woods, if only Celia is brave enough to find out. Story in voice.
Posted by Derry McMahon at 7:20 PM