TUESDAY, August 9th: Adventures far from Home, and Music in The Glen 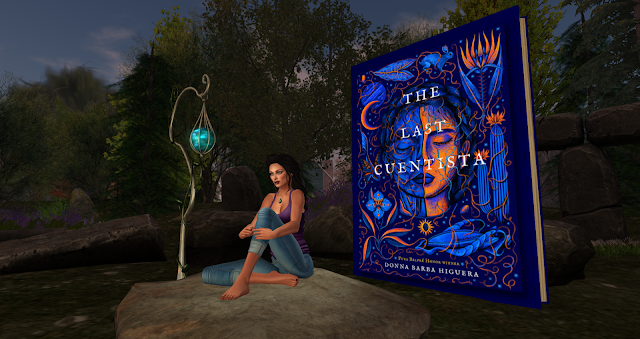 Both of today's sessions are in The Glen
http://maps.secondlife.com/secondlife/Nowhereville/197/131/21
@NOON: RUSSELL EPONYM, Live in The Glen!
Join us for Russell's popular weekly performance in our beautiful Glen for an hour of 100% live and unplugged acoustic music and spoken word.  Russell will be presenting original and traditional songs, instrumental pieces and covers, together with some selected poems. Folk Baroque and Beyond.
\
@7PM: THE LAST CUENTISTA - Continues

There lived a girl named Petra Peña, who wanted nothing more than to be a storyteller, like her abuelita.

But Petra’s world is ending. Earth has been destroyed by a comet, and only a few hundred scientists and their children – among them Petra and her family – have been chosen to journey to a new planet. They are the ones who must carry on the human race.

Hundreds of years later, Petra wakes to this new planet – and the discovery that she is the only person who remembers Earth. A sinister Collective has taken over the ship during its journey, bent on erasing the sins of humanity’s past. They have systematically purged the memories of all aboard – or purged them altogether.

Petra alone now carries the stories of our past, and with them, any hope for our future. Can she make them live again?