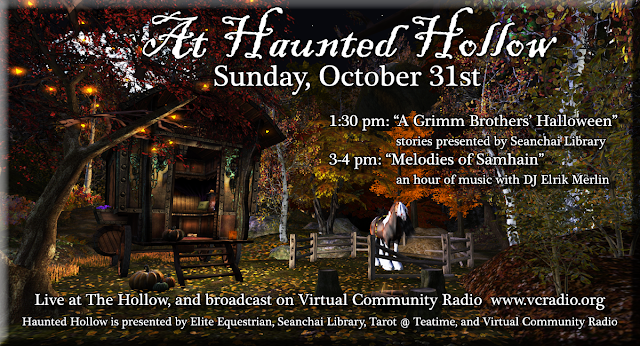 @ 1:30pm slt/pacific: TEATIME ~ A Grimm Brothers' Halloween, live on stream at The Halloween Tree at Haunted Hollow.
Followed by music & dancing "Melodies of Samhaim" with Elrik Merlin - join us at The Hollow or listen in live on Virtual Community Radio. https://vcradio.org/

The Brothers Grimm Jacob Ludwig Karl Grimm (1785–1863) and Wilhelm Carl Grimm (1786–1859), were German academics, philologists, cultural researchers, lexicographers and authors who together collected and published folklore during the 19th century. They were among the first and best-known collectors of German and European folk tales. Their classic collection, Children's and Household Tales (Kinder- und Hausmärchen), was published in two volumes: the first in 1812 and the second in 1815.

Between the first edition of 1812–1815 and the final seventh edition of 1857, they revised their collection many times, so that it grew from 156 stories to more than 200. In addition to collecting and editing folk tales, the brothers compiled German legends. Individually, they published a large body of linguistic and literary scholarship. Together, in 1838 they began working on a massive historical German dictionary (Deutsches Wörterbuch), which, in their lifetimes, they completed only as far as the word Frucht (fruit).

Many of the Grimms' folk tales have enjoyed enduring popularity. The tales are available in more than 100 languages and have been adapted by filmmakers (including Lotte Reiniger and Walt Disney), with films such as Snow White and the Seven Dwarfs and Sleeping Beauty. During the 1930s and 1940s, the tales were used as propaganda by the Third Reich; later in the 20th century psychologists (such as Bruno Bettelheim) reaffirmed the value of the work, in spite of the cruelty and violence in original versions of some of the tales, which the Grimms had eventually sanitized.
The Tea Time Crew presents five of these tales, mostly from the lesser known parts of the canon. All would be grim enough on your average day, but are all the more so on All Hallows.
Da5id Abbot, Gloriana Maertens, Corwyn Allen, Kayden Oconnell, Caledonia Skytower, and Elrik Merlin present.
Posted by Seanchai Library at 6:38 AM