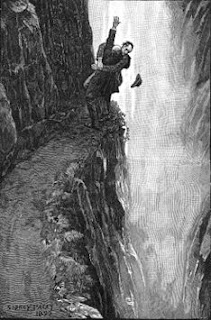 Corwyn and Caledonia conclude this series of Tea Times with the very last chapter from The Memoirs of Sherlock Holmes: THE FINAL PROBLEM.

It was first published in Strand Magazine in December 1893. Conan Doyle later ranked "The Final Problem" fourth on his personal list of the twelve best Holmes stories. This story, set in 1891, introduces Holmes's greatest opponent, the criminal mastermind Professor Moriarty.

Holmes arrives at Dr. Watson's one evening in a somewhat agitated state and with grazed and bleeding knuckles. He has apparently escaped three murder attempts that day after a visit from Professor Moriarty, who warned Holmes to withdraw from his pursuit of justice against him to avoid any regrettable outcome.  Holmes manages to outwit his assailants but admitted that there was virtually no hope of proving that the man was in the employ of the criminal mastermind.

Holmes has been tracking Moriarty and his agents for months and is on the brink of snaring them all and delivering them to the dock. Moriarty is the criminal genius behind a highly organized and extremely secret criminal force and Holmes will consider it the crowning achievement of his career if only he can defeat Moriarty. Moriarty is out to thwart Holmes's plans and is well capable of doing so, for he is, as Holmes admits, the great detective's intellectual equal.