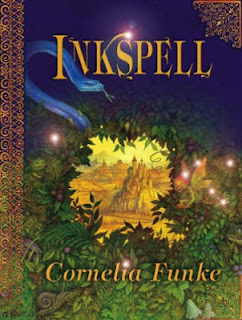 Author Cornelia Funke is one of today's most beloved writers of magical stories for children. She is the author of The Thief Lord, Dragon Rider, Inkheart, Inkspell, Inkdeath, the Ghosthunters series, When Santa Fell to Earth, and Igraine the Brave. She lives with her family in Los Angeles, California, in a house full of books.

"... Inkspell should serve as a special treat for fans of the first book, as characters from Inkheart who have found themselves in the "real world" (if there is such a thing) find themselves read back into their own mythic, word-spun world--along with some of our favorite "real-world" characters. As with the previous book, Funke's greatest accomplishment here is telling such a rich and involving (and fun!) story, while still managing sweet, subtle commentary on the nature of words and meaning. Expect a tantalizing finale, too--as Funke says, "No reader will forgive me the ending, though, without a part three."
--Paul Hughes - Amazon.com Reviews