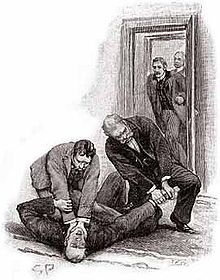 Cale & Corwyn continue the journey through The Memoirs of Sherlock Holmes this week with THE ADVENTURE OF THE REIGATE SQUIRE.

Watson takes Holmes to a friend's estate near Reigate in Surrey to rest after a rather strenuous case in France. Holmes finds that his services are needed here, but he also finds that his recent illness serves him well. His host is Colonel Hayter.

There has recently been a burglary at the nearby Acton estate in which the thieves stole a motley assortment of things, even a ball of twine, but nothing terribly valuable. Then one morning, the Colonel's butler tells news of a murder at another nearby estate, the Cunninghams'. The victim is William Kirwan, the coachman. Inspector Forrester has taken charge of the investigation, and there is one physical clue: a torn piece of paper found in William's hand with a few words written on it. Holmes takes an instant interest in this, seeing something that Forrester has missed.