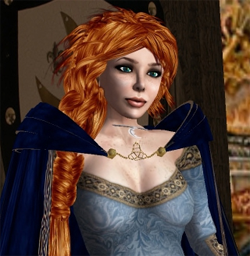 LIBRARIAN EMERITUS ...  As many of you know, Derry McMahon founded the Seanchai Library (its original name being the West of Ireland Library and Cultural Center) in March of 2008.  After over four years of building and maintaining a program she has stepped back her participation to pursue other interests on the grid, including her burgeoning talent as a visual artist through virtual photography, and spending time with her partner Bear Silvershade (also a retired member of the Seanchai core staff).  She stays a part of the Seanchai family, and she and Bear will still be presenting stories at the Library or other venues as opportunities seem appropriate. Chief Storyteller Shandon Loring, and Lead Caledonia Skytower will continue the good work begun by Derry.

Thank you Derry for all the years and all the hours of diligent work, seen and unseen, bringing stories to life in Second Life!

DOCTORS WITHOUT BORDERS ... In honor of Derry's retirement to "Emertius", the January- February featured charity was "Derry's Choice" instead of the review process the staff usually use.
Doctors Without Borders/Médecins Sans Frontières (MSF) works in nearly 70 countries providing medical aid to those most in need regardless of their race, religion, or political affiliation.  As always presentations at Seanchai are free to all residents. Those who wish to show their appreciation, if they desire,may join us in donating to our featured charity.

SEANCHAI REVIEWED! Aoifee Loon is a long time Seanchai lover who recently published this review of the Library in the MetaBizList Directory.  Her review was added to recently by CW Washborne.  Check them out!