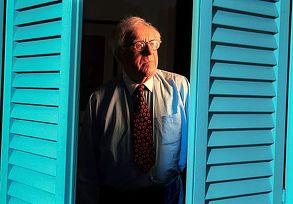 The late Ray Bradbury was a legendary sci-fi writer whose works were translated in more than 40 languages and sold tens of millions of copies around the world. Although his imagination created a world of new technical and intellectual ideas, he had never driven a car and did not have one. Gyro Muggins presents this classic Bradbury short story in Voice, “Frost and Fire.”
“Something is wrong with the world you've been born into. One hour old yet somehow you know your world bakes and freezes every day with only an hour before sunrise and an hour after sunset to forage outside. You have an entire lifetime ahead of you to find the answer. You have seven days.” Presented in two Parts.
Learn more about the amazing literary legacy of Ray Bradbury!