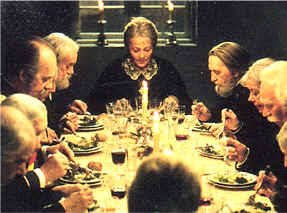 Babette's Feast: A mysterious Frenchwoman prepares a sumptuous feast for a gathering of religious ascetics and, in doing so, introduces them to the true essence of grace. At first they protest the idea of a lavish meal, having been used to avoiding any ocassion of sensual pleasure (even that of good food). They are an unhappy lot, the privations of the years have taken their toll on body and soul.

Although the celebrants do their best to reject the earthly pleasures of the food and drink, Babette's extraordinary gifts as a true connoisseur, so characteristically French, breaks down their distrust and superstitions, elevating them not only physically but spiritually. Old wrongs are forgotten, ancient loves are rekindled, and a mystical redemption of the human spirit settles over the table — thanks to the general elation nurtured by the consumption of so many fine culinary delicacies and spirits. The eucharistic, albeit mundane celebration around the table shadows the "infinite grace… [that] had been allotted to them, and they did not even wonder at the fact, for it had been but the fulfillment of an ever-present hope."