TEA TIME on The Orient Express

Seanchai Library and friends embark on a literary journey through one of Agatha Christie's most notable adventures - Murder on the Orient Express. Everyone loves trains, right? 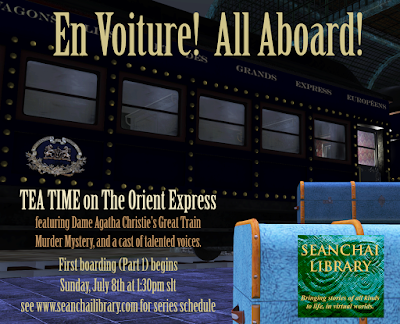 Summary: After taking the Taurus Express from in to , private detective Hercule Poirot arrives at the Tokatlian Hotel. There he receives a telegram prompting him to return to . He instructs the concierge to book a first-class compartment on the Simplon-Orient Express, leaving that night. Although the train is fully booked, Poirot obtains a second-class berth, but only with the intervention of a friend and fellow Belgian who is also boarding the train, M. Bouc, a director of the railway, Compagnie Internationale des Wagons-Lits. Aboard the train, a malevolent, elderly American, Samuel Ratchett, attempts to hire Poirot because he believes his life is threatened, but Poirot refuses out of distaste for the man.

Imagine the surprise when the famed train is trapped in the Yugoslavian mountains by an avalanche, and the unpleasant Mr. Ratchett turns up dead - horribly murdered!

Seanchai Library presents Murder on the Orient Express in a skybox especially designed for this series. Climb aboard - En Voiture! - and join a cast of talented voices for the six week series.

Visit TEA TIME on The Orient Express at Holly Kai

Check this page for more details, as they become available. Schedule
Note: Specific sections of text covered may vary slightly,
and will be revised as details emerge. 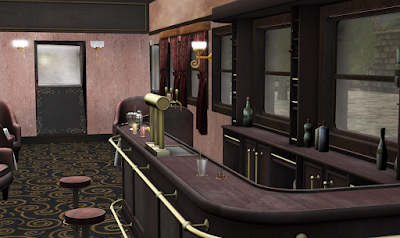 Hercule Poirot - A retired Belgian police officer. Poirot is Christie's most famous detective and is known for his short stature and long, curly moustache. Poirot is very intelligent, extremely aware and instinctual and is a brilliant detective. The novel is generally written from his perspective.

M. Bouc  - The director of the Compagnie Wagon Lits and formerly worked for the Belgian police force with Poirot. Traveling on the Orient Express, M. Bouc asks Poirot to take the case. M. Bouc provides comic relief in the novel, constantly frustrated with the case and confused by Poirot.

Mrs. Hubbard  - Mrs. Hubbard provides constant interruption and diversion on the train and is known for her stories about her daughter. Mrs. Hubbard's compartment is next to Ratchett's.

Ratchett  - A self-identified "businessman."  He has a certain brutal, bullying quality that makes others uncomfortable.  He employs McQueen and Masterman.

Countess Andrenyi  -  The Countess is quite young, dark haired and beautiful, and somewhat fragile.

Cyrus Hardman  - The big flamboyant American, who turns out to be a detective with a well-known detective service in .

Hildegarde Schmidt  - Has a kindly face set in an expression of "placid stupidity." Hildegarde is rather slow-minded and unquestioningly carries out the Princess's orders in her capacity as maid.

Pierre Michel  - the Conductor of the Orient Express Calais coach.

Check out this  2009 produced for ITV Studios. All copyrights for this production reside with the respective copyright holders.

Another view, of course departing from London and not Istanbul.


Check this page for more details, as they become available.

Thought some of you might enjoy a little musical entertainment during your travels:

Fantastic!! Who is/are the creators of this series in world....I missed the gathering yesterday, dying to find out.

Hey @Saoirse Heart! Sorry we did not see this at the time. Always lots going on. This series, and others like, as well as The Dickens Project in Second Life, are produced by Seanchai Library (whose blog this is). For more information contact lead staff Caledonia Skytower, or Shandon Loring.