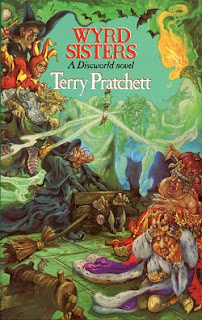 Caledonia takes us on another adventure into the Discworld of the late Terry Pratchett, live on Stream.

King Verence I of Lancre is murdered by his cousin, Duke Felmet, after his ambitious wife persuades him to do so. The King's crown and child are given by an escaping servant to the three witches. The witches hand the child to a troupe of travelling actors, and hide the crown in the props-box. They acknowledge that destiny will eventually take its course and that the child, Tomjon, will grow up to defeat Duke Felmet and take his rightful place as king.  What could possibly go wrong?

Posted by Seanchai Library at 10:47 AM