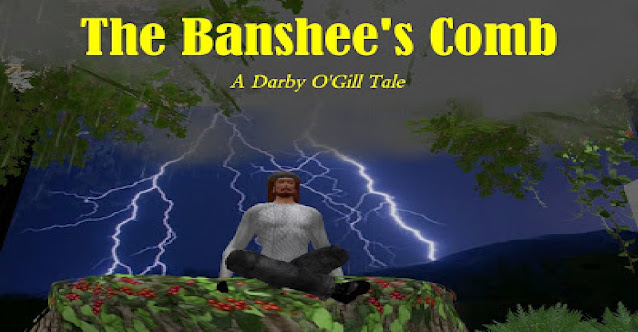 THE BANSHEE'S COMB
Recorded as a true event in early 1800s, a young boy had the temerity to steal a comb from a banshee. Banshees are an Irish entity that will sing laments for people before they die; and for the crime of stealing the banshee's comb the youth was haunted and driven by her phantom keening and wailing until he was almost dead...
Tonights story is of a similar encounter that Darby O'Gill once had, in which he finds the end part of a comb that later turns out to belong to a banshee. In her attempts to locate the missing piece, the phantom woman summons up a host of ghosts from the graveyard to sweep through the countryside and towns looking for it! If you want to know how Darby O'Gill escapes, well... come hear the story tonight!
"All at once the side of the mountain ferninst them opened with a great crash, an' Shaun, with the coach an' horses, disaypeared in a rush, swolleyd up be the mountain, which closed afther thim. Darby was blinkin' an' shiverin' beside the King of the Leprechauns,when sudden, an' without a sound, the banshee stood before them."