We continue down our in-between-the-holidays path today with a return to Dickens, but not the Dickens most people think of - especially not at this time of year. 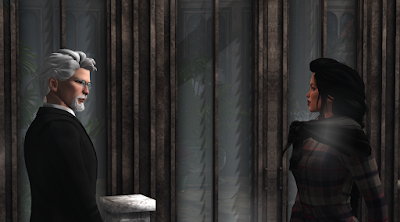 Da5id Abbot and Caledonia Skytower share two tales from the darker recesses of the Dickensian canon:

The Signal-Man was first published as part of the "Mugby Junction" collection in the 1866 Christmas edition of All the Year Round. The railway signal-man of the title tells the narrator of an apparition that has been haunting him. Each spectral appearance precedes a tragic event on the railway on which the signalman works. The signalman's work is at a signal-box in a deep cutting near a tunnel entrance on a lonely stretch of the railway line, and he controls the movements of passing trains. When there is danger, his fellow signalmen alert him by telegraph and alarms. Three times, he receives phantom warnings of danger when his bell rings in a fashion that only he can hear. Each warning is followed by the appearance of the spectre, and then by a terrible accident.

To Be Read at Dusk finds its first-person narrator amid the Swiss mountainous region of Saint Bernard, eavesdropping on a nearby group of men while avoiding the boring conversation of fellow travelers indoors. The sun is setting, giving way to strange thoughts and memories. The group is composed of five couriers from different nationalities, sharing instances of déjà vu, of omens and visions that mysteriously come true. As their stories co conclude, the couriers vanish leaving the narrator admitting that what he has heard has rendered him afraid of being left alone in such a place or in any other place.

Posted by Seanchai Library at 2:30 PM