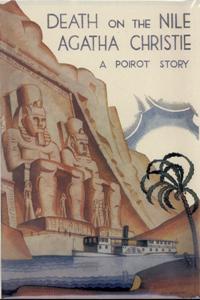 Death on the Nile is a detective fiction novel by British writer Agatha Christie, first published in the on 1 November 1937, and in the by the following year. The edition retailed at seven shillings and sixpence (7/6) and the edition at $2.00.

The full length novel was preceded (1937) by a short story with the same title, but with Parker Pyne as the detective. The details of the short story's plot are substantially different, though the settings and some of the characters are very similar. The novel features the Belgian detective Hercule Poirot. The action takes place in , mostly on the .
***
IMPORTANT NOTE: The Seanchai Library TEA TIME series will be 6 weeks long, with the sessions on February 2nd, and March 8th being 90 minutes in length (all other session are roughly one hour).  In order to fit the main action of the novel into that series slot, a "selected adaptation" will be presented that has been shortened from the original 82,330 words to roughly 60,000 words.  The first section of the book (Part 1: England), which provides the exposition and background of the complicated relationship between Linnet and Simon Doyle, and Jacqueline de Bellefort will be skipped entirely.  We recommend that interested audience read the summary below to get the gist of that section's importance to the overall plot.
***
Summary - What We Skipped:
While on holiday in , Hercule Poirot is approached by socialite heiress Linnet Doyle. She requests his help in deterring her friend Jacqueline de Bellefort from hounding and stalking her.

Linnet had recently married Jacqueline's fiancé, Simon Doyle, which has made Jacqueline bitterly resentful.  She has set about a campaign of benign harassment, conveniently appearing at every destination on the Doyle's grand honeymoon tour. Poirot refuses the request, but attempts unsuccessfully to dissuade Jacqueline from pursuing her plans further. Simon and Linnet secretly board the steamer Karnak, set to tour along the , to escape her, but find she had learned of their plans and boarded ahead of them.